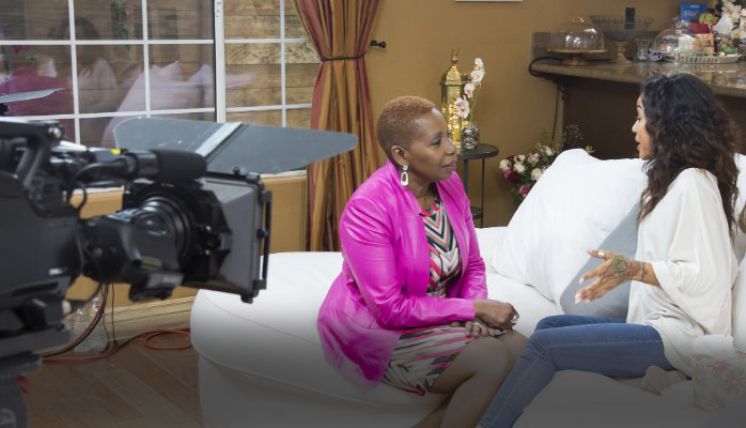 Iyanla Vanzant was on #Fiyaaaah in this interview!! She went in on Karrueche in true “go hard or go home” fashion. Of course not in a mean way; in the Iyanla Vanzant ‘dear heart, lay in my bosom,’ kind of way!! LOL. For those of you who watch #IyanlaFixMyLife, y’all know EXACTLY what I’m talking about!! However, surprisingly, Karrueche didn’t flinch!! She was tough!! She answered all of the questions very openly and honestly. I was all in!! I didn’t move away from my television to pee, to eat or to drink!! Missing one minute, would be missing a whole lot!!

I thought it was very eye opening how clueless Karrueche was when Iyanla challenged her about all of the classic relationship mistakes that she made. She sounded as young and dumb as she is!! Making real naïve statements like, “I wanted to love him because that’s what he needs. After four years, I know what he needs.” WOW!! #DISASTER!! Poor little ‘womanchild!!’ This little 5 year old girl (a person between the ages 18-25) doesn’t realize that Chris Brown didn't need her love!! He needed a doormat!! She was it and he enjoyed walking all over her! Hey maybe I’m wrong!! Maybe he did love her. Who knows!! But the question I would pose to her is, “DO YOU LOVE YOU!!??” Cause that’s all that matters!! The coupe de grace was when she said Chris Brown needed church and yoga. Church and yoga?? That statement made my #BrainBleed so badly I started yelling at the television like she could hear me, “Karrueche Tran, girl, Chris Brown doesn’t need church and yoga!! HE NEEDS TO LIE ON SEVERAL COUCHES!!!” OMG!! Is it me??

To make matters worse, Karrueche Tran KNEW that Chris Brown backtracked to Rihanna for a New York minute, but she thought it was a ‘friend thing??’ Really?? She didn’t want to believe that they were “gettin it in,” because she loved him and he has a sweet side?? Serial killers all have a sweet, loving side, but it doesn’t mean you date them!! LOL. #IJS. Ok, somebody please tell me what that is?? Who thinks that!!?? Do you know?? Cause I sure as hell don’t!! A blind person could see that Chis Brown was having sex with his ex!! Karrueche even went as far as saying that the affair with the random chick and the baby was a mistake. Karrueche, if you are reading this blog post I want to ask you, “are you a bimbo!!??” Chis Brown creeping on you and making babies, ain’t a mistake!! That’s just some ole sloppy, nasty, disrespectful behavior!! THAT’S IT AND THAT’S ALL!! They even discussed the fact that she thought #ChrisBrown would change!!?? Wake up little girl!! Folks don't change unless it benefits them!! In my Tamar Braxton voice, #GetchaLife!! Well, at least #karruechetran had the good sense NOT to take it out on the baby momma, like most women do!! That was refreshing to learn.

Wait, Karrueche, did I hear you correctly?? You wanna get married!!?? Karrueche, Karrueche, Karrueche, NOOOO little girl!! NOOOOO!! You don't need to be thinking about marriage right now!! YOU ARE A FIVE YEAR OLD!! When I heard her say that I wondered, “where the hell are #karruechetran's parents?? Was she raised??” Turns out that #karruechetran's father was MIA (missing in action) most of her life. I had guessed that!! Which is why she's hungry for male attention!! Sounds like she's looking for a man, any man; to love her!! SAD!!

While I do think that Karrueche Tran is a #DISASTER, she did walk away with some valuable life lessons. She now knows that putting her business on social media was a bad move!! Ya think!! Why a grown a_s woman didn’t know that, is beyond me!! As the old saying goes, “a mind is a terrible thing to waste!!” Going forward, #karruechetran has committed to focusing on her career. YES!! Good answer!! That was music to my ears!! Cause as #ChisRock said, "penis is a bad investment!!" #LMFBAO!! She is very beautiful and seems like a sweet young lady. I'd love to see her act and model. The good news is, she’s young and has time to get it together. Hope she stays on her grind!!

Welp, those were some of my highlights about the #iyanlafixmylife exclusive with Karreuche Tran on #own. If you missed it, no worries, you’ll catch it. It’s cable; shows rerun to death!! LOL.

Tweet
Rate this item
(0 votes)
More in this category: « The Day Oprah Winfrey Followed Me Check Out My New Website It's Right & Tight! »