SELMA is the story of Dr. Martin Luther King, Jr.’s historic struggle to secure voting rights for all people – a dangerous and terrifying campaign that culminated with the epic march from Selma to Montgomery, Alabama, and led to President Lyndon B. Johnson signing the Voting Rights Act of 1965. Watching this film was eerily familiar!! Because 50 years after the march, in the wake of Treyvonne Martin, Ferguson and Eric Garner, SADLY, in 2015, we are still marching against racial injustices. Selma was another reminder that we have much more work to do!! On an episode of #OprahPrime, @OWN, Oprah and David Oyelowo, touched on the issue of race relations then and now.

When I’m not able to attend red carpet screenings, everyone who knows me, knows that I always go to see films opening night. Not just because I’m a journalist, but because I like to be in the know!! I also love the energy and excitement that comes with it!! But more importantly, I am aware that the impact of seeing a film opening weekend, can be the make or break of the film’s success. So I always encourage people to make it their business to go out and see movies during opening weekend; especially black movies because it sends a strong message to Hollywood that WE do wanna see films like Selma!! So WE will support films like Selma! Therefore, films like Selma WILL make money!! And speaking of money, Selma opened very respectably nationwide Friday January 9, raking in $11.2 million dollars at the box office and was the second highest grossing film this weekend behind #Taken3’s. #Ca-ching!! 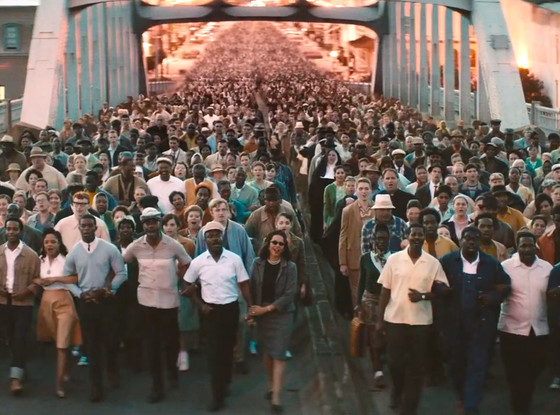 Who should see Selma?? EVERYBODY!! I understand that there is some sort of fund set up by black leaders, for high school students in New York, to see Selma for FREE, during the week of Martin Luther King’s birthday. Wonderful and VERY APROPOS!! I would also love to see schools do class trips to see the film and make this a part of their history curriculum, because it’s an important piece of history, that we need our young people to learn about.

We’re coming up on award season and the streets are buzzing about Selma. AWESOME SAUCE!! Howeva, I’m worried!! Selma is missing nominations because there seems to be some kind of #shenanigans going on with the distribution of screeners. It was omitted from the #ProducersGuildOfAmerica's 10 contenders list because Paramount Pictures sent DVD screeners to academy voters, but not the guilds, reported Variety.com. DISASTER!! And if that wasn’t bad enough, Selma was also shut out from the #ScreenActorsGuildAwards nominations last month because voters hadn’t received screeners. And I know that to be true because I’m a member of #SAG and when I didn’t get a screener of the #SelmaMovie, I screamed like I had been slapped in front of Macy’s window!! Why?? Because everyone knows that these early nominations are usually the precursor to winning an #Oscar or at least being nominated. What the hell is that about?? How did #ParamountPictures screw that up?? Is it a conspiracy?? #OMG, let’s all keep our fingers crossed that Selma sweeps the #AcademyAwards because it’s more than deserving!! No, I’m not saying that because I’m black. I don’t have a horse in the race. I’m saying it because Selma is a masterpiece!! #PeriodDotCom!! Shout out to Mr. #BradPitt for producing Selma; obviously he gets “it.” Oh yeah, Common did his thing on the sound track. It’s fiyaaaa!!

Tweet
Rate this item
(0 votes)
More in this category: « It’s A Hard Knock Life: But Not For The Movie Annie!! Fire The Fox Show Empire! »