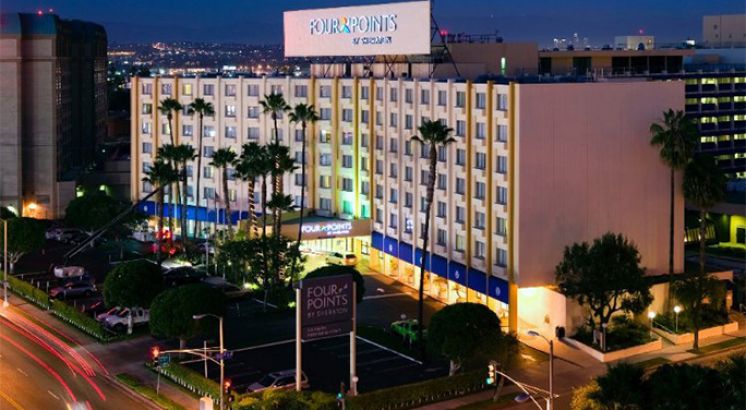 You Can't Sleep Tight Cause The Bed Bugs Bite @ Four Points By Sheridan at the Los Angeles Airport!! I checked into the hotel on Tuesday, February 9th and by Thursday I woke up and saw these three, red, itchy bumps on my chest and on my side that I was curious to know what they were, so as I usually do, I went online and BAM, it was said that these kinds of bumps are in fact #BedBug bites!!! They look just like the photos I saw on the internet. DISASTER!! Check them out for yourself in my video.

I'm telling you right now, I am never staying at #FourPointsBySheraton ever again because what I also discovered when I was online was that they had a bed bug problem since at least 2012!! There have been several complaints about a bed bug infestation at your hotel since then and now three years later you still have a bed bug issue!!?? That tells me you did nothing about it for three years!! So you 'mothercluckers' took my money and let me get bitten up by bedbugs over the course of several days!!?? FRIGHTENING!!

There is even a review in #TripAdvisor about the hotel in 2012 that exposed the bed bug infestation at Four Points by Sheraton at the Los Angeles Airport. A Starwood Preferred Guest member and frequent traveler said, "I was HORRIFIED when I pulled back the corner of the sheet and saw the mattress corner covered in dried blood." There is another review in #TripAdvisor in 2014 about the hotel's bed bugs where a customer complained, "The next morning I woke up and had a breakout on my arm. I figured it was a reaction to the lotion because this usually happens to me with different skin care items. On the flight back to Florida, my back started itching really bad and I realized the same reaction was all over my back. Again, thinking it was a reaction to the lotion, I just applied Benadryl and called it a day. Fast forward 2 weeks later, the itching and the bumps are only getting worse, I go to my doctor and find out I have bed bugs. I am seriously grossed out. I keep gagging every time I think about it. My husband is calling the hotel tomorrow. I hope they burn that freaking bed." So based on my research, their bed bug problem dates back to at least 2012. NASTY!!

Ok, when I went to the management to complain, I spoke with Charles Fort, the Director of the Front Office, he was extremely nice, apologetic and accommodating. I couldn't have asked for better customer service. He had me fill out an incident report, he called a man named Hidle, Executive of Housekeeping and Mohamed M. Abouelrous, Director of Operations, to assist in changing my room, sending all of my clothes to get laundered and dry cleaned to make sure there were no bed bugs in them. However, they took a thousand hours to bring my clothes back, which made me late for a meeting. If I didn't harass them for my clothes until I got them, I would have missed the meeting altogether!! I wasn't happy about that but I had to pick my battles. Anywhoo, they did make attempts to satisfy me by giving me three free breakfast vouchers to use for the remainder of my stay and even discounted my me for my entire 5 day stay. That's real cute!! Butcha know what, my issue isn't about the money!! My issue is about the fact that Four Points by Sheraton did absolutely nothing about those bed bugs since 2012 and didn't give a 'cluck' if people got bitten up by bed bugs between then and now because they're greedy!! They want to continue to make money without spending any money to clean up their current bed bug issue or preventing future issues.

I found it very suspicious that the mattress and box spring that I slept on in my first room had no bed bug covers on them, but when they moved me to my second room, those mattresses and box springs had bed bug covers on them, which tells me that they knew full well, the whole time, they had a bed bug issue in the entire hotel!! They have 500 beds in the Four Points By Sheraton at the Los Angeles airport and they only covered some of the beds and not all of them!?? They're being CHEAP!! It's clear they don't wanna spend the money on covering up all 500 mattresses and box springs with bed bug covers to ensure that ALL customers are comfortable!! They're only interested in making money, not protecting customers!! I spoke with the General Manager, Peter Kolla on the phone and he actually admitted that it would be too expensive to cover all 500 mattresses and box springs with bed bug covers. I vehemently disagreed!! I told him, "those covers are not expensive at all, but it doesn't matter if they were, that's the price of doing business!!" Later that day, he had the nerve to email me the results of some bootleg report that went something like this, "we are pleased to inform you that the results of our investigation which included a thorough inspection of the room you stayed by Kill Masters, showed no evidence of beg bug infestation. I have attached a copy of the inspection clearance form for your records." WOW!! REALLY!!?? Does he think that we're stupid!!! That game has played out!! The reaction to bed bug bites ain't brain surgery!! I was bitten by bed bugs in their hotel!! THAT'S IT AND THAT'S ALL!! So I didn't even respond to that ridiculous email!!

Although the hotel washed and dried my clothes, the FIRST STOP I made before I stepped into my house was straight to the laundry to wash and dry my clothes AGAIN!! However, my luggage went to garbage heaven!! So for all of you who might have booked a hotel room at Four Points By Sheraton at the Los Angeles airport, do yourself a favor, cancel and stay some place else if your don't want to get bitten by the bug!!