No, no, no, no, no!!! DISASTER!! The abuse in episode 1, on the new #Fox show Empire, was totally ignorant and WACK!! The character #Cookie, (played by #TarajiPHenson), beat the crap out of her GROWN son #Hakeem (played by #BryshereGray) with a broom stick?? AND HE DID ABSOLUTELY NOTHING?? Really?? WOW!! My eyeballs popped out of my head!! I was infuriated!!

First of all, that's 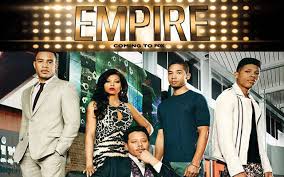 not even close to realistic to me. I think in reality, her son would have grabbed that stick and cracked it across her back!! Or at best, he would have grab the stick and ripped it out of her hand. Sending a strong message, to stop, or else!! But a grown man, cowering to the floor, as his mother beats him savagely with a broomstick?? NOT BUYING IT!! The writers need to sell that bridge to lobotomy patients!! LOL. Any mother or any person would KNOW that the minute you lay hands on someone, you are inciting a fight!! Son or no son!! So "Cookie" would never have gone there!! I can't fight, but trust and know, if my mother had the balls to hit me once with a broomstick, I would have stomped her into the ground. PERIOD!! Well, my mother could fight, so I probably would have gotten my a_s kicked, but she would know I was there!! 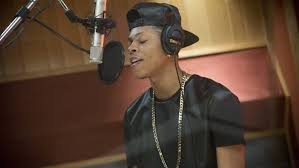 The writers of Empire made a lazy attempt to justify the mother's beat down, by having her son call her a bitch. Well she is!! The son Hakeem, hadn't seen his mom since he was a little boy because her drug dealing a_s was locked up in prison for 17 years. So Cookie get's out of jail and thinks that she was gonna be looked at as mommy of the year?? Get the 'cluck' otta here!! In fact, she's 'mommy dearest!!' Viewers are not dumb!! We are people too and most of us would be angry at a mother who spent our entire childhood in prison. When Hakeem called Cookie a bitch, I felt that his feelings were appropriate under the circumstances, because he saw her as a stranger. Which she was!! If parents want respect, they have to give it!! And you can't give respect to your child while you're behind bars!! I'm sorry, watching that scene made me sick to my stomach!! It really made my #BrainBleed. 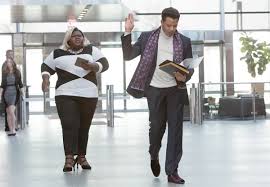 Then #Luscious, (played by #TerranceHoward) kept throwing and hitting #Becky (played by #GaboureySidibe) with candy for using his bathroom and she did nothing?? She didn't even seem angered by it. ABSOLUTELY NOT!! I would have run up on him and smacked his a_s into next year and called the cops on him; THEN QUIT!! Yes, I know it's a gangster drama. Yes, I like dramas, gangsta or otherwise. However, Empire is a runaway train!! It's a bootleg 'mafia-esk' show, that's doing a very bad job at biting off of the critically acclaimed HBO series, Boadwalk Empire. NO, I don't find gratuitous violence believable!! IT HAS TO MAKE SENSE!! Needless to say, @Empire is turning me the hell off!! However, I'll hang with it for a New York minute because I do believe new shows need to find their groove. But if they fail to grab me and keep me engaged, I will have the remote control strategically placed in my hand, to Fire the Fox show Empire!!

And black folks, please don't bash me for my not so good review of a drama with an all black cast. Know that I am a very conscious black person who understands the struggle!! Yes, I know the importance of "us" supporting "our" work. Which I do!! I will always, give ALL shows and movies with an all black cast, directed and produced by "us," my undivided attention. As I did with Empire. So far, I rode with them for the first two episodes. THAT'S SAYING SOMETHING!! But I am a journalist!! Who happens to be black!! So when I write my blog posts, I want yall to treat me like any other professional who has a point of view; WITH RESPECT!! Let a sista LIVE!! "And scene!!" LOL.